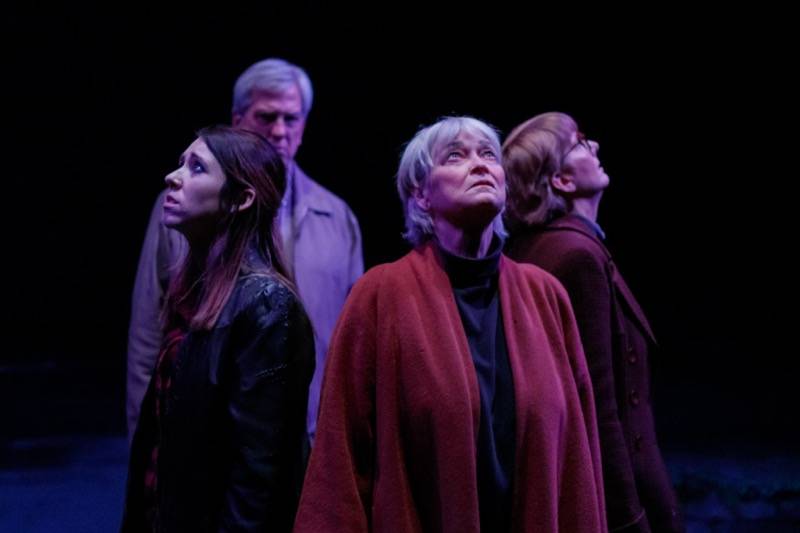 Green and blue and red all over. Stepping into the theatre, I see these colors that evoke strong emotion. The green of the seemingly endless rolling hills of Lockerbie. The cool blues and greys of the shirts hung looming over the set almost as if they were characters themselves.  The bold red of the clothing strewn about the hills immediately striking the eye. With these things, set designer Niccole Powers, creates the mood that will carry through to the end of the show.

The creation of this tone was clearly a significant aspect in the director, Mathew Green’s, vision. He begins the show with the women in masks walking the hills of Lockerbie, hinting at the show’s similarity to Greek tragedy. This decisiveness and detail is what you’ll get at The Celebration Company at the Station Theatre’s Women Of Lockerbie. And with the direction of Mathew Green, I would expect nothing less.

Maddie Livingston’s grief is at the center of the production. Played skillfully by Mindy Smith, she used her quiet voice as a vital tool to build a character of substance. Her tone was soft and empty. She was like Lady Macbeth singing a grief-stricken ballad. She made us listen. It never felt as if Maddie was in our world, her thoughts and memories swarming around her like flies she can’t bat away. These distinct choices made by Smith were certainly a highlight of the performance.

Bill Livingston, Maddie Livingston’s husband, was as solid as a rock in the hills of Lockerbie. Until he wasn’t. Bill desperately tries ease his wife of her grief. To do so, he must be stoic. Lincoln Machula, who plays Bill, demonstrates this faux stoicism well, and really gets to shine when the facade crumbles.

The heart of the women of Lockerbie was Olive Allison (Barbara Evans). Barbra’s performance was dynamic and enthralling. Everything she did felt completely genuine and natural. In a play centered around such tragedy, she brought kindness. With her moving performance, I was especially happy that tissues were set out in the lobby.

Eric Schacht, on the other hand, plays George Jones, a self-serving politician. The feud between Jones and Olive was absolutely hilarious, and made even better by the impeccable comedic timing of Schacht.

Adding significantly to the comedy of the show was the character of Hattie. Jordan Needham, who plays Hattie, also has her timing down pat. She had some killer one liners that relieved the production of tension exactly where it was needed.

The all-star cast, gorgeous set, and brilliant direction make this show a must-see. Right now especially, we need to expel hate. We need love and compassion. And The Women of Lockerbie brings it.

The Women of Lockerbie
The Celebration Company at the Station Theatre
January 24th to February 2nd
222 N Broaway, Urbana

Tickets are $15 (not including service fee for ordering online)