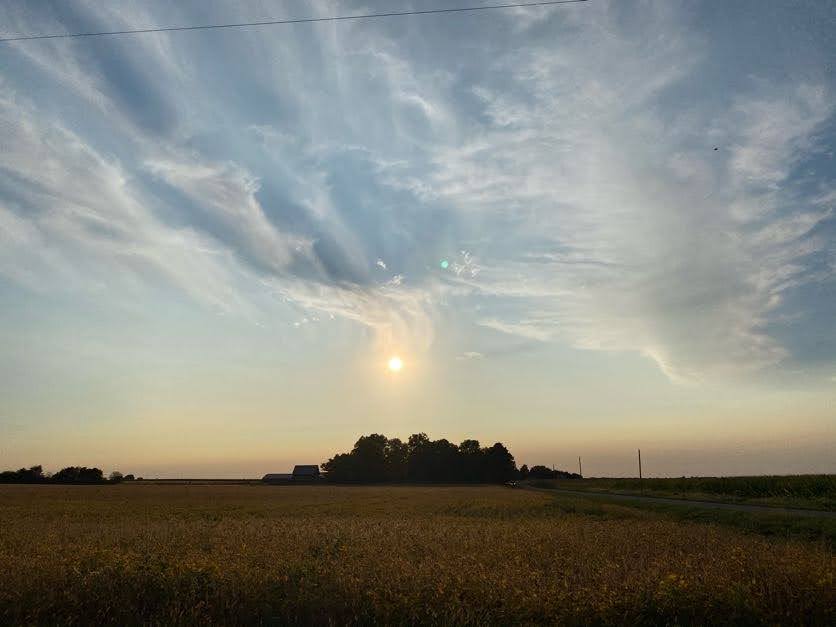 We were poised to see a continuation of a pattern that was sending shots of cool/dry air into the Midwest, taking warm and muggy overnights and low temperatures in the 70s along with it. That’s precisely what we saw through the month of September in Champaign-Urbana. After a run of more summer-like 80s to start the month off, we finished mostly with high temperatures in the 60s and 70s accompanied by overnights spent in the chilly 40s and 50s. Perfect weather for sleeping with those windows open! Through the month, 18 of 30 days were within three degrees of the daily average temperature. September simply was not a month of extremes.

We only came as close to our monthly precipitation average as we did thanks to a pair of stormy days on September 7th and 9th that left a badly needed 0.92″ and 1.12″ respectively on our drying soil. Those two days made up 2.04″ of our 2.91″ total for the month. The rest of September featured mostly dry weather; 24 of 30 days reported no rainfall. The rain we did receive came quietly with no major severe weather events in Central Illinois during the month. I’m still dealing with insurance adjusters and contractors as we finalize repairs at our home from the July hailstorm, so I’ll go ahead and speak for everyone when I say a month without severe storms in our backyard is just fine.

Our weird weather experience in September came in the form of dense plumes of smoke from wildfires in the western U.S. being advected into the Midwest by jet stream winds. Many days in mid-September featured cloud-less skies that should have been a pure blue, but were instead muted by a milky haze. This was all smoke that had been blown eastward, thousands of miles away from California, Oregon, and Washington. Unfortunately, this may become a more routine occurence as wildfire seasons continue to escalate out west.

Where are we headed in October? I’m prepared to take my lumps on this one. October is often a month of many different faces as we begin to really transition from summer to winter. Long-range weather models have strugged to sniff out the right look, but if you squint through the haze, my guess is that between a storm system here or there, we’re likely looking at much of the same weather going forward. What’s that mean?

I’m calling for an October that finishes with near average temperatures and below average precipitation. We’re warming up a bit as we head into the second week of October with a couple of 80 degree days on the table. We should see this warmer weather last until around mid-month before we get another shot of cooler air that adjusts our temperatures downward. During that adjustment period October 12-15, it’s possible we could see a storm system swing through the Midwest bringing rain and thunderstorms back to our area. This again appears to be an exception to the rule, however, and I expect the last half of October to close on a mostly cooler, quiet, and dry note.

My bet is we see a lot more sunshine and pleasant weather in Central Illinois this month.

For context, the average monthly October temperature in Champaign-Urbana is 53.9 degrees and the average total monthly precipitation is 3.26″.