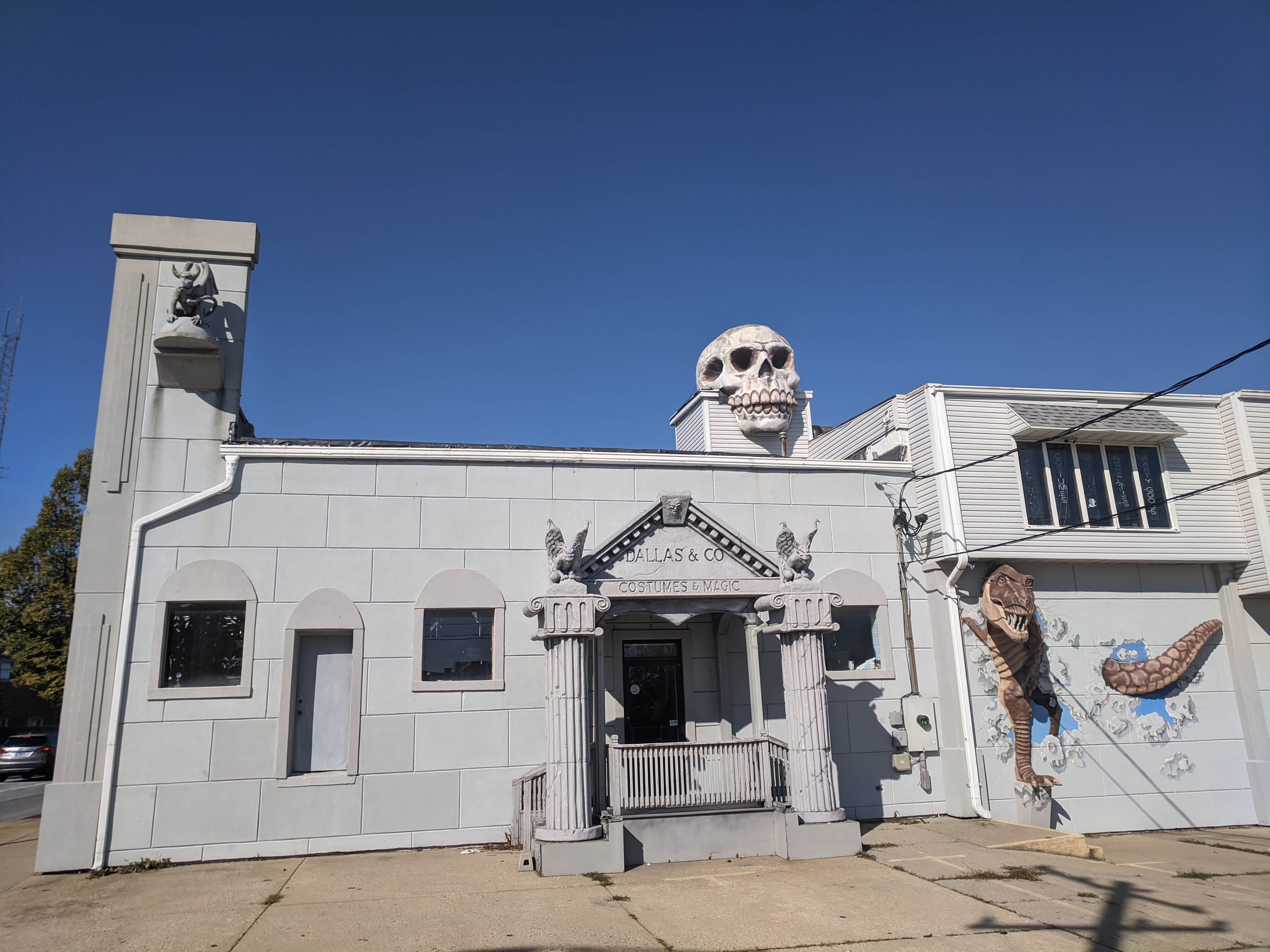 We were all saddened to hear last year about the end of Dallas & Company. However, when searching recently for spooky things to write about in my traditional Halloween column, I rode past Dallas & Co. and noticed all the different creatures and characters that formerly welcomed visitors to the store are still intact. So here they are readers, all the Dallas Denizens ranked from least-spooky to most!

Note that I spoke with a few former employees of Dallas & Company and they told me that, to their knowledge, none of these statues had names. Thus I’ve taken it upon myself to ask each creature their name and learn a bit about them.

“Now Tom,” you must be saying, “how could a 15-foot-tall Tyrannosaurus be the least-spooky inhabitant of the Dallas & Co. facade?” Well first off, I’ll remind you that rampaging dinosaurs are scary, not spooky (important difference), but also, just look at this friendly face!

Tabitha doesn’t want to eat you, she’s happy to see you! So happy in fact that she’s bursting through the wall to say hi. Tabby misses her old job of greeting Dallas & Co customers, though people (like me) do still drop by pretty often to take pictures of her.

There’s a total of three gargoyles standing watch over the South entrance to Dallas & Co. This is one stands above the rest, but it’s certainly not a position of leadership.

As you can see, Dingo tries to be menacing, but he’s really more of a jerk. The type of loud rapscallion fellow who thinks the funniest shit in the world is making somebody trip and spill their beer. Dingo won’t make you fear for your life, but he might ruin your day. Then he’ll laugh, and laugh, and slap his little gargoyle pedestal, and crack his tail like a whip. What a turd.

The other two gargoyles are actually sisters. You’d be forgiven for thinking they’re identical twins, but look closer and you’ll notice that one has her ears up, and the others are down.

These are two tough gals, each with decades of gargoyling experience, however Lefty (the one on the right) is definitely less spooky. Lefty works hard but also plays hard. She loves doing classic gargoyle stuff like flying around at night eating wayward squirrels, and dropping rocks onto windshields.

Dorene also likes to do all that stuff, but she’s the spookier sister because her 30 years of smoking left her voice a raspy, painful whisper. The kind you definitely don’t want to hear on a chill October night.

Old Man Sondelli was a real human being years ago, but he got caught shoplifting four Tootsie Rolls and a plastic magician’s wand out of Dallas & Co. The checkout lady at the time, Janice, turned out to be a powerful witch who put a curse on Old Man Sondelli, trapping him in the capstone of the store’s entryway. This was way back in 1993, but Sondelli is still there serving out his eternal sentence. A grim reminder of what happens when you cross a witch. I urge you not to look into Old Man Sondelli’s eyes for very long. His hatred can be contagious.

Honestly if you’d asked me a few weeks ago if there was anything on the roof of Dallas & Co. I’d have said, “I don’t think so.” But now I’m looking at photos I took and there above the other Dallas Denizens sits a massive, stoic human skull.

Maybe people don’t notice Xed because they’re too busy looking at the T-Rex popping out of a wall. I dunno though, these past few weeks I’ve found Xed has a particular talent for fading out of memories of Dallas & Co. and appearing in others memories where Xed does not belong.

Xed is clearly the ruler of this motley crew. Xed has existed for many eons and will outlive the building and all of us. Xed inhabits thoughts and shatters them at will. Though no scientific instrument can confirm this, Xed grows larger, ever larger, with each passing moment.

I suppose these are all good reasons why Xed is the spookiest of the characters at Dallas.

While taking pictures for this column, I admired the many neon signs at Dallas & Co.

Of all of these, the spookiest by far is “CARNIVAL SUPPLIES” which I think is delightfully vague.

The signs that say MAGIC would be spookier if they didn’t have top hats next to them suggesting that showy tricks, not occult secrets lie within.